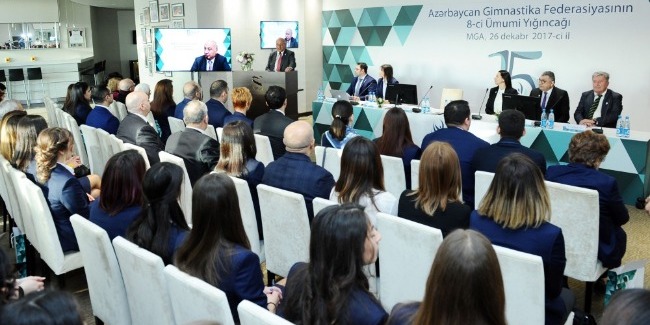 At the event, Vice-President of the Federation, Altay Hasanov, taking into account AGF’s 15th Anniversary, made a report on the AGF's 15-year activity after it was re-established in 2002.

Speaking about the governmental care showed to the development of sports in our country, the Vice-President emphasized the achievements of our gymnasts on the international arena within the past 15 years and high-level organization of major competitions in gymnastics disciplines in Azerbaijan. Highly valuing the performances of our gymnasts at the IV Islamic Solidarity Games held in May of this year, Altay Hasanov noted the development of six gymnastics disciplines in our country.

Altay Hasanov stressed that the development of this sports discipline is always in the limelight of President of Azerbaijan Gymnastics Federation Mrs. Mehriban Aliyeva. The AGF Authority’s role in gymnastics achievements are irreplaceable. The Vice-President noted that the election of AGF Secretary General Farid Gayibov as the President of the European Union of Gymnastics was one of the significant achievements among them.

After the awarding ceremony, Menzer Hajiyeva, who developed a special design for a new set of clothes for the members of the National Teams in gymnastics disciplines, made a presentation on the given set.

Member of the AGF Disciplinary Commission, Elshad Narimanov emphasized in his speech high level constant attention and care of the President of Azerbaijan Gymnastics Federation Mehriban Aliyeva shown to gymnasts. He highly valued Mrs. Mehriban Aliyeva's work directed to the development and massive involvement of the population in this sports discipline in our country and emphasized a peculiar place of gymnasts in recognition of Azerbaijan as a sports country in the world.

Afterwards, member of the Executive Committee of the Federation Rauf Aliyev spoke about the works done, successes achieved and the perspective plans.

The event was continued with discussions.