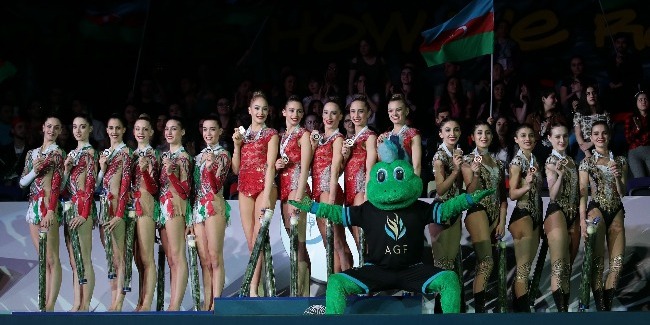 Today, another international competition - Rhythmic Gymnastics World Cup has come to an end at Milli Gimnastika Arenası (National Gymnastics Arena). The Arena, which became the favourite venue for the gymnasts from all over the world, witnessed the magnificent event performed by rhythmic gymnasts within 3 days.

The gymnasts from 26 countries gathered in our capital, defined the winners in the all-around competition and apparatus finals as well as owners of the FIG Cups and AGF Trophy, both in the individual program and in group exercises accordingly.

Our country was represented in the individual program by Zohra Aghamirova, Veronika Hudis, while Ayshan Bayramova, Aliya Pashayeva, Siyana Vasileva, Zeynab Hummatova and Diana Doman performed within the group.

On the last day of the tournament, there was held final performance of the Azerbaijani Rhythmic Gymnastics Team in group exercises with 5 hoops. At this excitedly awaited stage, our girls won the bronze medal of the World Cup, having perfectly executed their routine.

Our group gymnasts’ performance with 3 balls and 2 ropes in the finals brought them the 5th place.

In the individual program, in total of performances with 4 apparatus, Veronika Hudis ranked the 12th and Zohra Aghamirova became the 17th in the all-around.

The organizing committee always distinguished with its innovations, has added special atmosphere to the rhythmic gymnastics competition by live music performance. Musicians, who professionally performed national and foreign music between the routines presented delightful moments both to the audience and athletes. And, of course, the mascot of the federation – Gur-Gur, entertained everybody and reduced the excitement of the tournament by introducing some diversity to gymnastics competitions with his performances.