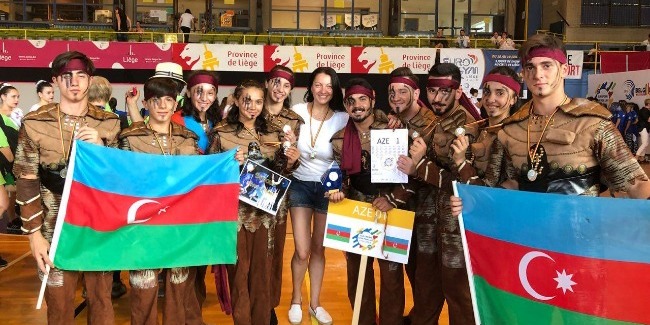 On July 14, the Belgian city of Liege hosted the 1st European Gym for Life Challenge under the patronage of the European Union of Gymnastics (UEG). At the festival organized for the first time, our compatriot, UEG President Farid Gayibov made an opening speech and wished successes to all the participants.

800 gymnasts from 12 countries, including the Azerbaijani team, competed in the event. The teams, consisting of persons born in 2006 and earlier, took part in this competition the main objective of which is also perfection of group performances. Interesting and colorful compositions were mostly assessed on the criteria of diversity, technique, safety, originality, general impression and fun.

At this kind of competitions, all participants are considered to be the winners and they are all presented with the Gold, Silver and Bronze medals. Brilliant performances of our team consisting of Ruslan Eyvazov, Akif Karimli, Narmina Huseynova, Elcin Mammadov, Farid Mustafayev, Murad Akparov, Naryn Gurbanova, Gullu Aghalarzade, Narmin Jahangirova and Seymur Jafarov enabled it to be one the best among 37 teams and won the “Gold”. Our gymnasts distinguished themselves not only by their performances, but also with their particular competition attires and were awarded with diplomas in "Best Costume" nomination. And in the nomination of "Wow Performance", it was the Portuguese team to be distinguished.

It should be mentioned that representatives of Azerbaijan also won the Gold medal at the World Gym for Life Challenge organized by the International Gymnastics Federation in Vestfold (Norway) last year.