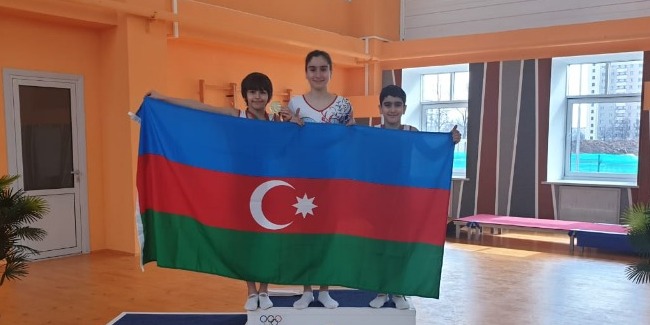 There was held the Belarus Open Championships dedicated to the memory of Honorary Coach of Belarus - Valery Vagel in Vitebsk on March 27-29.

Along with the strongest gymnasts of the Host country, 85 gymnasts from Azerbaijan and Italy in total have performed in the tournament. It`s a pleasant fact that the junior representatives of our country succeeded to be among the winners.  Thus, Huseyn Abbasov won the Gold medal with 47.750 points, leaving behind all his rivals at Finals held yesterday. In the same age category, his teammate – Maqsud Mahsudov  won the Bronze medal, having received 47.510 points from the judges . Our female representative – Mahsudova Seljan completed the event at the 6th place.

It should be mentioned that the competition was organized at the Trampoline Gymnastics Centre which had been opened recently. The Belarus Open Championships was the first event hosted at this centre. The decision to build this facility was made after the brilliant victory of Belarussian gymnast - Hancharou Uladzislau at Rio Olympic Games.