Our gymnasts participate at the World Gymnaestrada 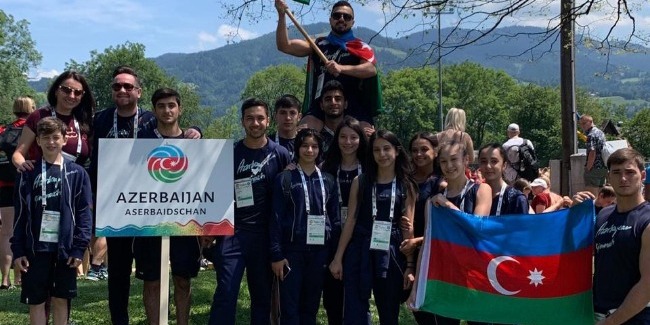 Last weekend, the City of Dornbirn, Austria, hosted the 16th World Gymnaestrada. The representatives of Azerbaijan also participated at this gymnastics festival which brought together about 20.000 participants from 66 countries of 5 continents.

At first, our team consisting of the members of the Azerbaijani National Teams in gymnastics disciplines – Narmina Huseynova, Elchin Mammadov, Daniel Abbasov, Murad Rafiyev, Sarvar Aliyev, Simara Jafarova, Gullu Aghalarzade, Narin Gurbanova, Narmin Jahangirova, Emiliya Nuraliyeva, Ruslan Eyvazov participated in the Opening Ceremony of the event. Afterwards, they demonstrated their performances at various arenas 3 times within these days and their performances were warmly cheered by the spectators.

The Azerbaijani team has been represented for the second time at the World Gymnaestrada, which brings everybody together every four years, regardless of age, gender, race, religion or social status.