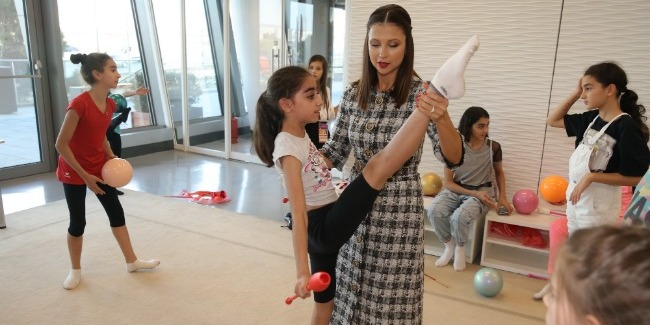 As expected, the appearance of Russian Honored Master of Sports at Milli Gimnastika Arenasi in Baku caused a great stir among the local public. Over twenty future gymnasts, together with their parents, were impatiently waiting for the guest.

At the beginning of the master-class, Batyrshina, together with the young gymnasts, did a warm-up. Then, each of the participants demonstrated all their skills in handling the ball, hoop, and ribbon.

Moreover, the repeated World Champion showed to the youth how to perform «Batyrshina’s jump». She noted that the gathered children have great potential and she was sure that a bright future awaits them.

In the end, Batyrshina had a selfie taken with each of the participants of the master-class, as well as with their parents.