The 37th World Championships – the Fairy tales have come to life 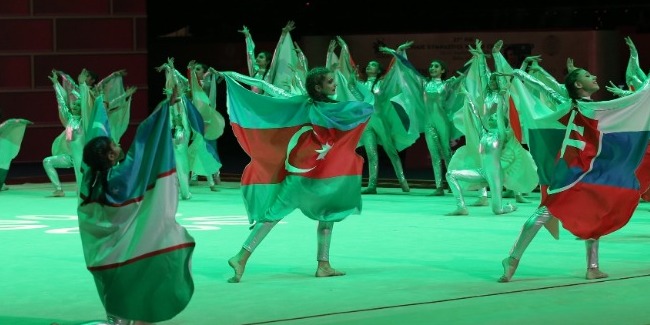 The Rhythmic Gymnastics World Championships hosted by our capital city completed its work. 61 countries and more than 300 gymnasts competed in the year`s most major tournament within 1 week. Not only the names of the Wold Champions, but also the most lucky gymnasts who qualified for the Tokyo Olympic Games were defined at Milli Gimnastika Arenasi (National Gymnastics Arena). This Championships became a real festival for the Azerbaijani team.

Intensive trainings, endless persistence, and set goals have borne its fruits . The representative of Azerbaijan in Individual program  – Zohra Aghamirova and Azerbaijani gymnasts in group exercises consisting of Aliya Pashayeva, Diana Ahmadbayli, Darya Sorokina, Ayshan Bayramova and Zeynab Hummatova succeeded to qualify for the Olympic Games. At the end of the long way, our girls demontrated their strength once more, having given the most pleasant gift to their supporters.

The Championships became one of the most memorable competitions for many teams. The fans who came to support their gymnasts traveled the world of fairy tales during 7 days. The Field of Play, decorated in the style of oriental fairy-tale, witnessed not only the spectacular and professional performances of gymnasts, but also the exciting emotions of the most cheerful fans.

The most funny figure of the Championships, of course, was Gur-Gur. The mascot of Gymnastics events, which has become a favorite of everyone, entertained the audience with his jokes and interesting programs.

The Championships started on September 16 with the slogan “The Fairy tale will come to life” made the fairy tales real, having left behind responsibility, rivalry, excitement, tears of victory and disappoinment.