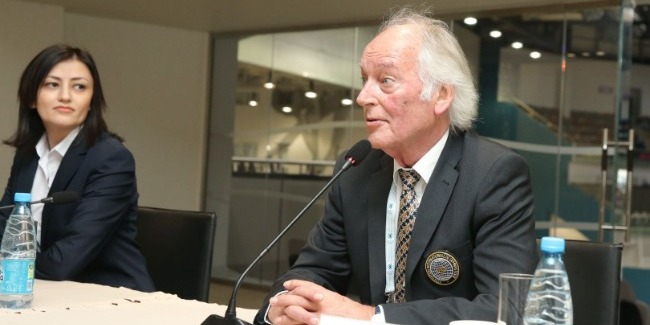 A meeting of heads and representatives of the delegations that arrived at the FIG World Cup in Trampoline and Tumbling in Baku has taken place.

At the meeting, Secretary General of the Azerbaijan Gymnastics Federation Nurlana Mammadzade welcomed the representatives of delegations and wished success to all participants in the competitions.

Mammadzade noted that if members of delegations need any help, they can always contact the local organizing committee, where they will be assisted.

In his speech, Horst Kunze, president of the Trampoline Gymnastics Technical Committee of the International Gymnastics Federation, praised the level of organization of the competitions.

“I wish all participants success in the competitions,” Kunze said. “I would also like to express my gratitude to the organizers of the World Cup - it’s a pleasure to work with such professionals. I’m sure that the competitions will be held at the highest level.”

Managers of the Azerbaijan Gymnastics Federation Farhad Ahmadbayli and Namig Badirkhanov also spoke at the event, and informed representatives of the delegations about the schedule of the competitions and medical services.

The FIG World Cup in Trampoline and Tumbling in Baku will be held Feb. 15-16. This will be license competition for the Tokyo 2020 Olympics. According to the preliminary list of applications, 30 countries have already confirmed their participation in the competition. More than 150 gymnasts are expected to take part in the event.