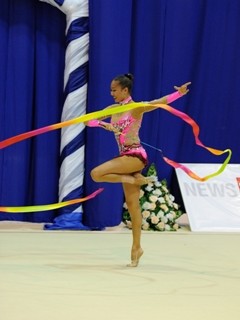 An Azerbaijani gymnast Aliya Garayeva has become the prize-winner of Fair Play award instituted by the country’s Olympic Committee this year. The special commission of the NOC headed by its Vice-President Khazar Isayev chose her as the best sportswoman committed to the principles of fair contest.

Fair Play ideas have also been one of the fundamental factors of the “Spartak” International Cup held in Moscow. Garayeva twice became the winner of the event having received high points in finals with a hoop (28.9) and a ribbon (29.1).

At the same time, there has been held a junior tournament in Zvenigorod situated near Moscow where 7 representatives of Baku Gymnastics School participated in. One of them Ilaha Mammadova (born in 2001) won the 3rd place losing high places to Russian sportswomen. Other gymnasts took the 4-8th places in their age groups.

And on the threshold of New Year, the national team’s gymnasts will take part in the traditional festive show. New Year Gala-ball called “The Scheherazade’s most beautiful tale” will gather its youngest spectators under the dome of Baku Olympic Sports Complex on December 26.