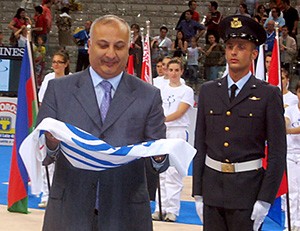 The next 25th European Championships in rhythmic gymnastics will be held in Baku! It has officially been stated on the closing ceremony of this year’s European Championships which has come to the end in Turin today. As a sign of it, Dimitrios Dimitropoulos, the president of the European Union of Gymnastics, handed the UEG flag over to Altay Hasanov, the president of Azerbaijan Gymnastics Federation. Euro-2009 will presumably be held in Baku in the middle of May.

The final events among group teams preceded the closing ceremony of the European Championships in Turin and handing of the flag over to Azerbaijan. According to the results of the all-around, an Azerbaijani collective consisting of Vafa Huseynova, Anna Bitiyeva, Valeriya Yegay, Alina Trepina and Anastasiya Prasolova had acquired a right to perform in both finals.

Our team brilliantly performed with 5 ropes without any mistake. They received 16.625 points for this performance and a lavish portion of applause from our fans, as well as from numerous Russian fans, even having learnt by heart words in Azerbaijani in order to support the team. Just imagine that our gymnasts lost only 0.05 points to the gymnasts from Spain who took the 4th place. The result is as follows: the 6th place in the final table taking the lead over Russian team, which showed a weak performance, and the team from Ukraine.

And Italian team became the champion with this apparatus – the local audience, which constituted the majority in the competition hall, was very happy. “Silver” was won by Belarus and bronze medals were won by Bulgaria.

Our group made only one mistake in the exercises with 3 hoops/4clubs, but this mistake was a serious one – a hoop went out of the floor limits. Usually, this mistake is strictly punished by judges. As a result, our group team took the 8th place (15.925 points).

As to the winners, Italian team has tried its best to win 2 gold medals today. But Russian team gathered its strength during the second exercise and won this gold medal within 2.5 minutes set by the time-limit, literally, without taking a breath. Belarus and Spain were competing for the third place without interfering in their contest. Both quintets received equal points, but according to the additional factors the “bronze” was taken to Minsk.

And these championships came to the end with an indispensable Gala concert, where along with well-known gymnasts, our gymnast Dinara Gimatova performed with a brilliant composition consisting of a hoop and a ball.