HUSEYNOVA, MUSTAFAYEVA, PROKOPENKO AND MAMMADOVA – THE WINNERS OF AZERBAIJAN AND BAKU CHAMPIONSHIPS IN RHYTHMIC GYMNASTICS 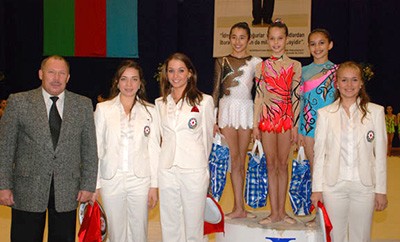 The number of participants in the 15th Azerbaijan and Baku championships in rhythmic gymnastics reached a record number. Along with the capital’s 85 gymnasts, who performed in four age groups, 7 gymnasts from Ganja also competed in the events.

An interesting contest for prize-winning places developed among the sportswomen born in 1993-95. Jamila Huseynova from the Republican Complex Sports School, who received 90.083 points, became an undoubted leader in the course of the whole tournament. Saida Abdullayeva from Baku Gymnastics School fell behind her with almost 2 points’ difference and her club-mate Esmira Orujova with 4 points’ difference.

Having received 88.683 points, Aysha Mustafayeva from the “Trade Unions” took the first place in the tournament of gymnasts born in 1996. Lala Yusifova (85.767, Republican Complex Sports School) and Aynur Jabbarli (81.567, “Neftchi”) were also among the prize-winners.

The whole pedestal was occupied by the representatives of the Republican Complex Sports School among the gymnasts born in 1997-98. The first place was taken by Yekaterina Prokopenko who received 63.267 points in the total of the all-around. Mansura Baghiyeva took the second place with 1.5 points, the third place – Gulsum Shafizada – 60.067 points.

Finally, Jannat Mammadova from the “Trade Unions” (38.367 points) became the winner in the youngest group of gymnasts born in 1999-2001. The second place was taken by her team-mate Mehbara Mansurova (38.217), the third place – Emiliya Baghiyeva (37.483, Baku Gymnastics School).

The 9th Azerbaijan and Baku championship in tumbling was also being held in parallel with these events. Along with the capital’s jumpers, gymnasts from Davachi also competed in the tournament but all the medals were won by the competitors representing Baku Gymnastics School.