CONTEST FOR REACHING THE FINAL 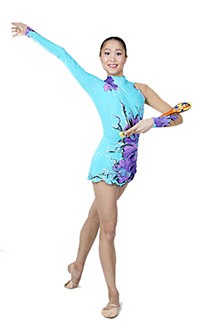 The third round of the “Serie A1 Italian championship” in rhythmic gymnastics was held in Italian city of Arezzo, where Azerbaijani sportswomen Anna Gurbanova and Aliya Garayeva were taking part in.

According to the press service of Azerbaijan Gymnastics Federation, Gurbanova’s team called “Comense 1872” took the 7th place having received 91.075 points. Anna performed with a rope (16.7) and a ball (16.625). Her results were the highest in the team again, and her index with a rope was the second among all the competitors performing with this apparatus. Only a Kazakhstan gymnast Aliya Yusupova from “Fabriano” performed better.

Garayeva’s club called “Ardor” took the 10th place (87.675). Aliya performed with a hoop, and became the third with this apparatus having received 16.2 points.

At this stage, the first place was taken by “Armonia” team which received 100.625 points. The championship’s final tournament will be held in Folinio on December 6.

By the way, Anna Gurbanova had arrived in Italy from Tatarstan, where she took part in the international tournament called “Yoldiz”. In Kazan, Gurbanova displayed exercises with a rope, a hoop, a ribbon, as well as a composition with a ball, which will come to take clubs’ place since 2009. Our gymnast was awarded in spite of the out-of-competition performance. Gurbanova won a special prize as a well-known sportswoman, bronze medalist of the European and World championships and World Cup events.

Another international tournament will be held in the capital of Croatia this week (November 28-30), where Zeynab Javadli is going to take part in.