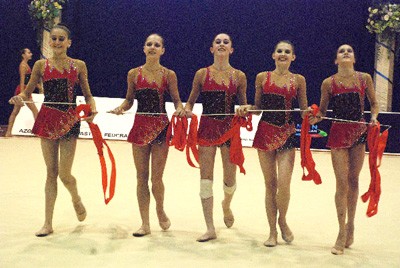 An Azerbaijani junior group team has won the silver medals in the international tournament in Holon, Israel.

According to the press service of Azerbaijan Gymnastics Federation, our gymnasts received 23.425 points for their performance with 5 ribbons and their result was the third after Russia and Israel on the first day of competitions.

“And the next day, Sabina Abbasova, Nigar Abdusalimova, Yevgeniya Jidkova, Ayelita Khalafova, Kamila Mammadova and Lala Maharramova performed even better,” the team’s head coach Mariana Vasileva noted. “The group received 23.85 points and took the second place having lost just to the floor’s hostess - Israel but taken the lead over Russia and Bulgaria. It was the last tournament for my juniors which became a good preparation for the European Championships to be held in Baku on May 15-17,” the Bulgarian specialist concluded.

There were also being held competitions of the Grand Prix series in rhythmic gymnastics in Holon. Both Aliya Garayeva and Anna Gurbanova performed in two finals with a rope and a ball. Aliya became the fourth and stopped half-step away from the bronze medal twice, and Anna won the 5th place with a ball and the 6th place with a rope. In the all around, Garayeva and Gurbanova took the 7th and the 9th places accordingly. The first place was won by Yevgeniya Kanayeva, the second place by her team-mate Darya Kondakova and the third place by Irina Risenzon (Israel).

The third gymnast Zeynab Javadli, who will represent Azerbaijan at the Euro-2009 in Baku, took part in the World Cup series in Maribor.

According to the qualification results, she acquired a right to perform in two finals. Zeynab took the 7th place both with a rope and a hoop. And in the all-around, she took the 9th place among 28 competitors.

A Russian Olga Kapranova became the winner, the second and third places were taken by Melitina Stanyuta and Lyubov Charkashina, the gymnasts from Belarus.

This week, the gymnasts’ caravan will move to the Apennine peninsula where one more series of the World Cup will take place on May 1-3. Aliya Garayeva, Anna Gurbanova, Zeynab Javadli, as well as an Azerbaijani senior group team will set out for Italian city Pesaro