NEITHER SNOWSTORM NOR BLIZZARD CAN BE TROUBLE FOR BAKU TOURNAMENT!.. 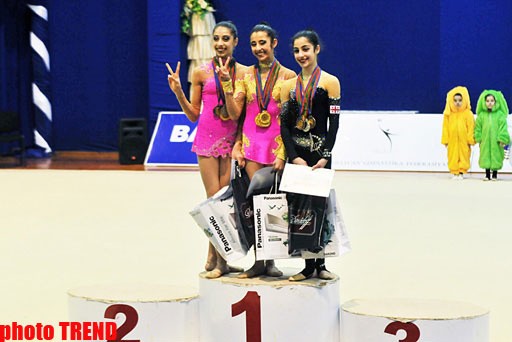 Unprecedented frosts indeed locked Baku for the last days reminded by daily weather forecasts could not impede the holding of the capital’s Championship in rhythmic gymnastics with a participation of three countries neighboring with Azerbaijan. While there was a snowstorm behind the walls of the Olympic Sports Complex, snowflakes were drawing on its windows movements as if they were repeating them after the gymnasts of Azerbaijan, Turkey, Georgia and Kazakhstan. And it was quite hot in the hall itself – the sportswomen were competing for 22 sets of medals in total!
And the event itself turned out to be a record-breaking – 130 participants and 4 group teams competed in. This fact was also mentioned by the head of Baku Principal Administration of Youth and Sports Ragif Abbasov. He also noted that these competitions had been the country’s first large-scale tournament of the current year announced by the President of Azerbaijan as the year of sports.
The most interesting contest developed among the gymnasts born in 1997-99. The victory in all kinds of the program except ribbon was celebrated by a representative of the Republican Complex Sports School Mansura Bagiyeva. Having won the first place with a ribbon her team-mate Gulsum Shafizada took the second place in the all-around. The “bronze” was taken away by Sofia Farulava from Georgia. It should be mentioned that the gymnasts of the neighboring country have successfully performed at Baku tournament (1 “silver” and 4 “bronzes”) and the Secretary General of Georgian Gymnastics Federation Pikria Pankvelashvili was ineffably happy with it.
Another representative of Republican Complex Sports School Zhala Piriyeva became the best in the tournament of 12-year-old gymnasts (all-around, a ball and a ribbon). Only in an exercise without apparatus, she was left behind by her club-mate Zuleykha Ismayilova who became the second in the all-around. And the “bronze” was taken by Rugiyya Sattarova (“Spartak”).
Another gymnast of the above mentioned society Leyli Ibrahimova was in the lead in all kinds of the program among the sportswomen born in 2001. The second place in the all-around was taken by Zohra Aghamirova (“Neftchi”), the third one – by Ilaha Mammadova (Baku Gymnastics School). Let us also note the “silver” of a gymnast from Turkey Selen Bektash in an exercise with a ball.
One more Turkish gymnast mounted Baku podium but among the 10-year-old competitors this time. Simay Akin became the bronze medalist in an exercise without apparatus. Figen Altay, the head of Turkish delegation, was very contented with the results and she also expressed her gratitude for participation of leading Turkish gymnasts in a 3-week’s training camp in Baku. In this age group, the first place was won by Vafa Hasanzada (Baku Gymnastics School) as it was with other kinds of the program, the second and third places were taken in the all-around – by Darya Sorokina and Laman Hajiyeva accordingly (both from “Spartak”).
Laman Huseynova (“Spartak”) won a victory in the group of participants born in 2003. The second place was taken by her team-mate Nigar Ali and the third one by Darya Farshbakhshahriyari from Baku Gymnastics School who was the first with a rope.
Finally, the top three among the youngest – 8-year-old gymnasts was as follows: Lala Kramarenko (“Spartak”), Arzu Jalilova (“Neftchi”) and Narmina Samadova (Republican Complex Sports School). It should be noted that a gymnast Jala Aghadadashova from Gusar, where gymnastics section was opened just last year, quite confidently took part in the event for the first time.
Only the gymnasts from Kazakhstan did not win any awards at Baku event. But according to their coach Veronika Zolotaryova, “the girls gained necessary competing experience and their performances were not worse in comparison with local competitions.”
The Open Championship was closed with performances of group teams’ gymnasts born in 2002-2004. The tournament’s main cup was won by the gymnasts from “Spartak”, and the remaining two – by the sportswomen from “Baku” Professional Sports Club and “Sarhadchi”.