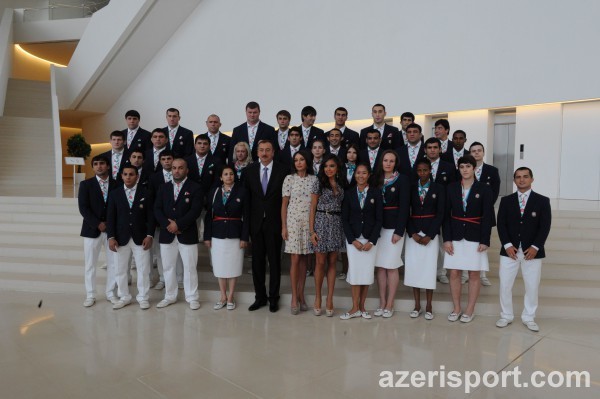 President of Azerbaijan wished all our sportsmen great successes. “We really have a very strong team which is able to achieve big successes. For the first time in history, Azerbaijan will perform at the Olympic Games with a composition great in number. A country, the team of which consists of 50 sportsmen at the Olympiad, is considered to be the sports state. This time, a number of our sportsmen who will compete in London is 53,” the President stated.

According to him, “there is a new young generation growing and majority of sportsmen in the composition of our Olympic team will take part in the Olympic Games for the first time. It shows that sport is consecutively progressing, generations are changing in sports. Young sportsmen take the place of elder ones, champions.”

“Today, Azerbaijan is known as the sports state in the world. We succeeded to take the worthy place in the international sports family. Any rival competing with Azerbaijani sportsmen undergo very serious trial the present day. It is not so easy to win the sports state title. We have won it due to our efforts, due to the work of our sportsmen and coaches. Our goal is to develop sports in our country and pave the way for successes of Azerbaijan.”

“Along with the regional Olympic Complexes, great Olympic infrastructure is being created in Baku as well. Several huge sports-concert halls have been built for the last years. And the greatest and grandest among them is certainly Baku Crystal Hall. After reconstruction and restoration works carried out at the Republican Stadium named after Tofig Bahramov, it is in conformity with world standards. Last year, a foundation of a new Olympic stadium was laid in Baku. It is necessary to build a new palace for aquatic sports and Swimming Olympic Center. The National Gymnastics Arena is under construction at present.”

“Sportsmen are our national heritage. Azerbaijani sportsmen prove themselves and will further do it at the sports arenas. I am confident that the Games in London will be another triumph of the Azerbaijani sports. I, like every citizen of Azerbaijan, will watch the Games, will support you and wait for your victories,” President of Azerbaijan summed up.”

It should be mentioned that in composition of the Olympic team Aliya Garayeva will represent rhythmic gymnastics and Shakir Shikhaliyev will perform in the artistic gymnastics tournament in London.