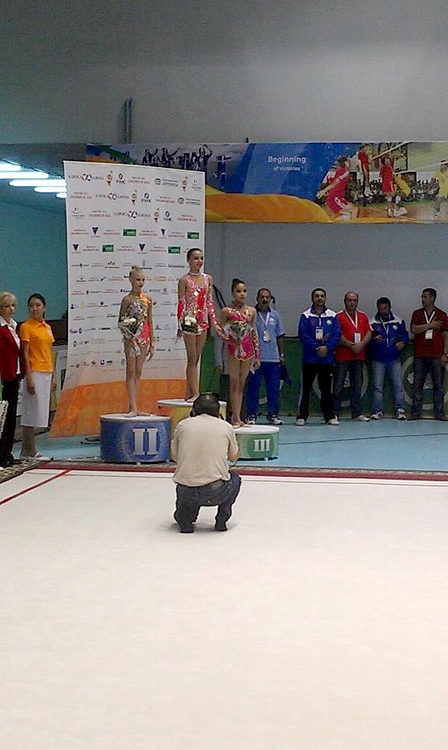 5 medals of different value has been won by Azerbaijani junior gymnasts at the “Children of Asia” V International Sports Games held in Yakutsk.

According to the press service of Azerbaijan Gymnastics Federation, a 14-year-old Baku gymnast Nilufar Niftaliyeva achieved a splendid result. The recent European Championships’ bronze medalist (Nizhny Novgorod) became the unconditional winner of these Russian competitions in the all-around! She left behind gymnasts from Russia and Kazakhstan, as well as the event’s other 16 competitors.

The next day, a young talented girl, made a brilliant display with clubs in the final and her main rivals could reckon only for “silver” and “bronze” again. In the final with a hoop, tiredness had an impact on her performance and Nilufar ranked the second as a result.

Her team-mate Mansura Bagiyeva (born in 1997) became only the 7th in the all-around but managed completely to introduce herself in two finals. Taming of the ribbon gave her the silver award, and the judges placed Baku gymnast on the third level of the podium for her performance with a ball.

Victory in the all-around and participation in all the finals of the program indicates that our juniors are able to carry on and impose struggle on their rivals in any tournament. Taking into account that the first half-year has been completed on a high note and there is only the Olympiad ahead, we have grounds to believe they will keep on and multiple the line successfully commenced within the months following the Games.

As to the approaching “battle” in London, the national team’s leader Aliya Garayeva continues to strengthen her preparation in Moscow. From there, she, together with Russian gymnasts will soon set out for Sheffield situated 2 hours away from the capital of Great Britain to take part in the final training camp prior to the Olympic performances at Wembley in August.