AZERBAIJANI GYMNASTS – FIRST ONES IN ITALY! 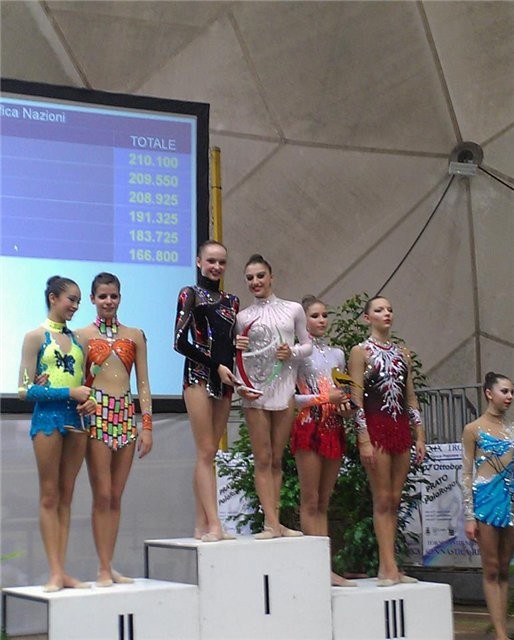 The 29th Trofeo “Banca Popolare di Vicenza-2012” international tournament in Italian Prato city has come to an end with a great ovation in honor of two Azerbaijani gymnasts!

The reason of it – was an awarding ceremony of countries, in the course of which a senior Lala Yusifova and a junior Marina Durunda mounted the highest level of the podium. Leaving far behind the floor’s hostesses and steadily threatening team from Belarus, led by a participant of the recent Olympiad in London and a bronze medalist ofthe World Championships Melitina Stanyuta.

Majestic music of one of the Azerbaijani three state attributes have already been familiar to Italian fans crowded the hall during the competition’s morning session.

15- year-old gymnast from Baku Marina Durunda won the audience with her performances, and, in general, won a victory with an overwhelming advantage – points from judges and decibels of delight from those who were watching her.

The third medal was recorded to the collective’s credit side by Lala Yusifova who won the “bronze”.

The national team’s head coach Mariana Vasileva was very content with her gymnasts’ performances. “Both Lala and Marina performed perfectly! With their compositions, they simply infected the audience with positive emotions which supported them in the course of the whole event,” she stated.

And according to the press service of Azerbaijan Gymnastics Federation, the main thing is that the gymnasts made a present to Mrs Mehriban Aliyeva elected as the National Federation’s President exactly ten years ago. We, together with the country’s whole gymnastics community, join the congratulations addressed to her and express our kindest wishes in her sports activity.