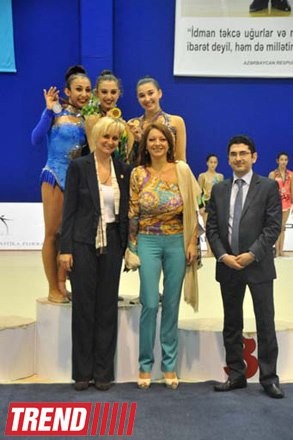 Over 80 competitors, gymnasts from 8 metropolitan sports societies,
6 winners, actually, packed hall of the Olympic Sports Complex –
and this is even not a full numerical list of the 19th Baku Rhythmic
Gymnastics Championship taken place on October 11-12.
The most interesting contest for medals developed among senior
gymnasts. Lala Yusifova and Aysha Mustafayeva, team-mates from
junior group team, who jointly got the “bronze” at Euro-2011, today,
were competing for the title of the best gymnast in the all-around.
At the end, Yusifova took the lead over Aysha Mustafayeva and
Rahima Abdullayeva who became the third.
The audience also witnessed the contest for the “place under the
sun” among the junior gymnasts as well. A 15-year-old Marina
Durunda gave no chances to Mansura Bagiyeva, even though she
lost to her in an exercise with clubs. The “bronze” was taken by
Yekaterina Prokopenko.
Jala Piriyeva, who left behind her nearest pursuer Zuleykha
Ismayilova in the individual all-around, won a resolute victory in the
category of gymnasts born in 2000-2001. The third place was taken by
Rugiyya Sattarova.
Among the sportswomen born in 2002, Vafa Huseynova became the
first. Prize-winning places were taken by Darya Sorokina and Laman
Hajiyeva.
The show among 9 year-old gymnasts was run by Maryam Safarova.
The “silver” was won by Laman Huseynova, the “bronze” by Aydan
Aghayeva.
And, finally, Lala Kramarenko took the first place among the youngest
gymnasts born in 2004. Arzu Jalilova became the vice-champion of
Baku. The “bronze” was taken by Zarniyar Aliyeva.
The event came to an end with a colorful Gala, as well as with
congratulations addressed to a veteran of Azerbaijani gymnastics
Ulkar Gasimova celebrating her 80th anniversary this year. She
had been in charge of this sports discipline at Baku Principal
Administration for Youth and Sports for a long time.