SECRETARY GENERAL OF AZERBAIJAN GYMNASTICS FEDERATION IS RE-ELECTED TO THE FIG COUNCIL! 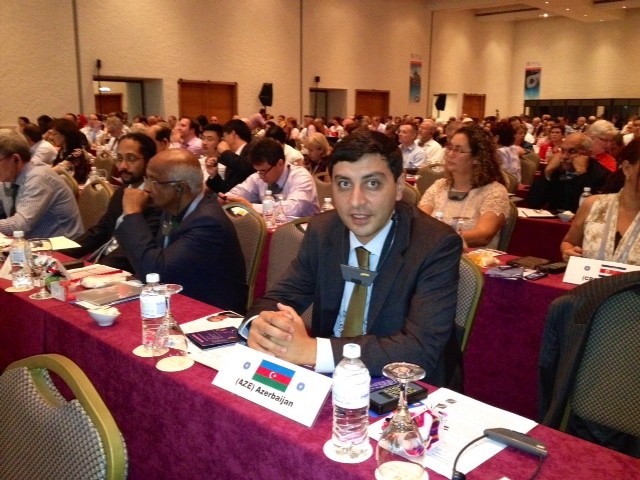 Glad news has come from the world-known Mexican resort city of Cancun where the 79th FIG Electoral Congress came to an end the day before. The forum’s participant in composition of the Azerbaijani delegation, the Secretary General of Azerbaijan Gymnastics Federation (AGF), Farid Gayibov has been re-elected to the FIG Council as its member from Europe!

The Azerbaijani representative was included into the composition of one of the FIG authorities for the second time. 49 delegates voted for his candidature, which was more for 14 votes in comparison with previous elections in 2008.

“I think our common goal is equitable attitude towards all National Federations, especially to new independent states and developing countries. I suppose all decisions made in future will serve for strengthening of the role of gymnastics as a sport discipline in the Olympic program, enhancement of sport prestige and moral image of the FIG in the eyes of the world community,” re-elected member of the FIG structure shared his opinion in the social network right away after ballots’ announcement.

No particular change occurred in the FIG’s top authority. An Italian Bruno Grandi has been re-elected as the President, Michel Leglise from France and a representative from Canada Slava Corn have remained as its Vice-Presidents. And Vasily Titov from Russia has become its third Vice-President.

There have been changes at the helm of three Technical Committees. Thus, in rhythmic gymnastics, instead of Maria Szyszkowska going out of office, Nataliya Kuzmina from Russia was elected as the head of the Technical Committee who had previously been the given committee’s member.

The Men’s Artistic Gymnastics Technical Committee’s President Adrian Stoica has also deserted his post. His place has been occupied by an American Steve Butcher. In addition, another representative of the New World Tonya Case has handed over the reins of world acrobatics government to Rosy Taeymans from Belgium.

It should be mentioned that within the framework of the Congress Azerbaijani delegation held a number of meetings and talks including the ones regarding the forthcoming European Rhythmic Gymnastics Championships to be held in Baku in 2014.