National Gymnastics Arena in Baku to be multifunctional 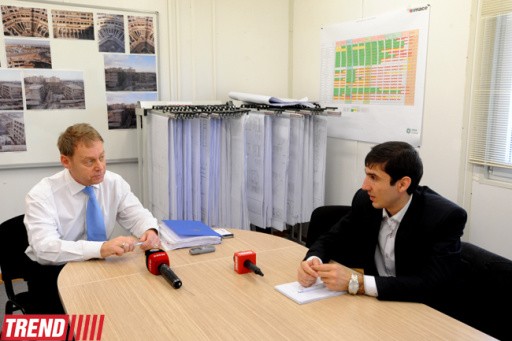 Works on construction of the National Gymnastics Arena in Baku is in progress according to schedule and its completion will meet a deadline.

According to Trend, it was stated by the construction project director, Phil Benson on Monday.

“General concrete works have already been completed and the constructors switched over to roofing works of the complex,” he said.

“Along with it, mechanical and electric installation works, including welding, facade’s finishing, adjustment and alignment works are being carried out within the complex,” Benson noted.

“In the arena’s construction, materials produced by domestic manufacturers, as well as supplied from the European countries are used,” he said.

According to Benson, arena has a number of advantages, i.e. besides gymnastics events, competitions in other sports disciplines, as well as concerts and other cultural events to be held there. In general, it will be a five-storey complex.

There are two auxiliary rooms as well as dining room and kitchen at the arena. Luxurious VIP lounges to be located above them.

National Gymnastics Arena, which is under construction at Heydar Aliyev Avenue, near “Koroghlu” underground station, will occupy an area of 24 thousand square meters and will approximately seat 9000. The European Rhythmic Gymnastics Championships-2014 will be the first event held there.