SEVEN MEDALS FROM THE BANKS OF THE DANUBE 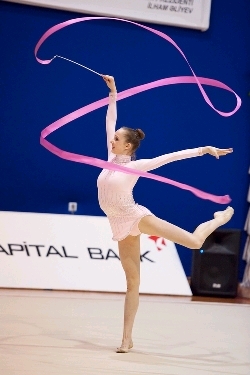 7 medals - 2 gold, 3 silver and 2 bronze ones - have been won by Azerbaijani gymnasts at the “Gracia Cup” International Tournament held in the capital of Hungary.

According to the press service of Azerbaijan Gymnastics Federation, Marina Durunda has most of the medals including two medals with tints of gold. The recent bronze medalist of the World Cup was honored with first places for exercises with a hoop and a ribbon, the “silver” was won with a ball in the all-around, and the “bronze” with clubs.

“In the absence of Lala Yusifova who had sustained an injury on the eve of the competitions, burden of the leader was put on Durunda, and, having reached all the finals, she did not disappoint us!,” the national team’s head coach Mariana Vasileva says. Moreover, her team-mate Aysha Mustafayeva kept Marina’s company standing on the podium during awarding for performances with a hoop where she became the third.

Another prize-winning place was taken by the gymnasts of the country’s junior team. The collective consisting of Gulsum Shafizada, Nilufar Niftaliyeva, Sabina Hummatova, Aliaksandra Platonova, Emilya Bagiyeva and Aynur Mustafayeva in the final exercise with 5 hoops took the second place just losing to the Belarusian team.

As to the junior individual gymnasts, the best result was shown by a 13-year-old Zhala Piriyeva performing in the elder junior group of gymnasts born in 1998-2000 and became the 4th with a hoop.

Meanwhile, a team of young Azerbaijani gymnasts have participated in the “Alina-2013” International Festival in Nijnekamsk where it was invited by an Olympic Champion Alina Kabayeva. The collective consisting of Ayshan Bayramova (born in 1998), sisters Sabina and Samira Alizada’s, Narmina Huseynova, Zeynab Hummatova, Fatima Bairamova, Jannat Mammadova (all born in 1999), Madina Ahmadova and Simara Jafarova (both born in 2000) presented the “Anastasiya” composition to the local audience.

In addition, 10-day training camp of the Turkish gymnasts’ team has started in Baku. According to the Turkish delegation’s head, quite good gymnast in the past, Berfin Serdil Sutchu, the main purpose of Baku trainings is a review of old exercises and development of new ones taking into account changes introduced this year, as well as preparation for the European Championships in Vienna.