The sixth in the final... 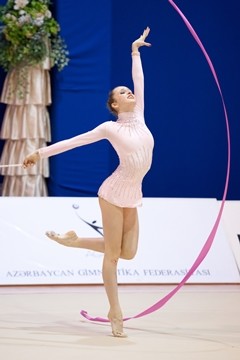 Azerbaijani gymnasts have become competitors in three finals of another Grand Prix Series and the international tournament held within its` framework in Thiais, France.

According to the press service of Azerbaijan Gymnastics Federation, Marina Durunda was the first who qualified for the final showing the 5th result in exercises with a ribbon and the 9th result in the all-around during the qualification.

In the final with this apparatus, she got the same amount of points as the day before (17.0), but she became the 6th losing to the competitor from Austria - host country of the next European Championships. As to the prize-winning places, they were shared between a Russian Margarita Mamoun, a Bulgarian Silvia Miteva and a Belarusian Melitina Stanyuta. Our second competitor Lala Yusifova took the 23rd place.

If individual gymnasts` thoughts are only about upcoming Euro-2013 in late May, the serious test for senior group teams will begin in summer - World Championships in Ukraine planned for August. The National team, consisting of Sabina Abbasova, Siyana Vasileva, Aliya Pashayeva, Irada Ahadzade, Sabina Garatova and Mansura Bagiyeva, qualified for both finals of the international competition where it showed the best result in the exercises with 3 hoops and 2 ribbons and took the 6th place. For the composition with 5 pairs of clubs, our girls took the final position. Like individuals, the Russian group team was on the leading position, the Chinese team got the "silver" and the bronze medals went to the Spanish gymnasts.

The next stop for the caravel with our gymnasts will be the Iberian Peninsula. The World Cup Series and international tournament will take place in Lisbon from 4th to 7th of April where the country's both senior and junior athletes will take part in.