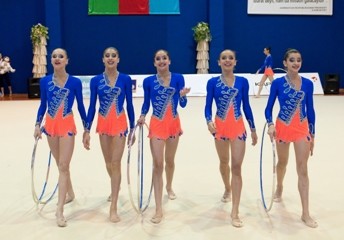 Gymnasts of the Azerbaijani junior group team won the bronze medals of the international competition held within the framework of another World Cup series in Lisbon.

According to the press service of Azerbaijan Gymnastics Federation, Gulsum Shafizada, Nilufar Niftaliyeva, Sabina Hummatova, Emilya Bagiyeva and Aynur Mustafayeva, with the result of 29.15 points, took the 3rd place in the final of an exercise with 5 hoops after Russia and Belarus. In the qualification, the girls, preparing for the European Championships in Vienna to take place in late May, showed practically the same result.

"Another junior group team, but consisting of the individual gymnasts this time, also made me glad," - says the head coach of the National Team, Mariana Vasileva. "Zhala Piriyeva and Zuleykha Ismayilova (both born in 2000), as well as Veronika Omarova (1999) took the 4th place among 19 teams, losing the 3rd place to the athletes from USA. I think they performed perfectly, and, despite of being the youngest among the participants, they competed for the "place in the sun at the equal level with them!"

The senior gymnasts, participating in the World Cup competitions, were marked with four finals. Thus, Lala Yusifova took the 5th place in an exercise with a ball. According to the coach, she performed with this type of apparatus "at a very good level", and, so, that the audience appalauded her in the standing position! Lala became the 6th in another final with clubs, and the 8th in the all-around.

Our second gymnast Marina Durunda also competed in the final with clubs where she took the 5th place.

The winner of both finals was the Russian Margarita Mamoun.

As to the group team of Azerbaijan, Sabina Abbasova, Siyana Vasileva, Aliya Pashayeva, Irada Ahadzade, Sabina Garatova and Mansura Bagiyeva qualified for the final of the exercise with 3 balls and 2 ribbons, where they took the 8th place. According to the results of two performances, they took the 9th place.

The Baltic voyage awaits our gymnasts this weekend. Prospective participants of Euro-2013 - Lala Yusifova, Marina Durunda and the junior group team - will compete at the international competition to be held in Riga, Latvia on April 13-14.