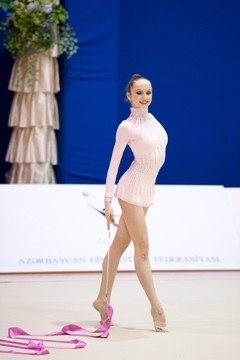 Azerbaijani gymnasts have won seven medals, four from which are gold, at the "Baltic Hoop" international competition held in Riga, Latvia.

According to the press service of Azerbaijan Gymnastics Federation, special praise was earned by Marina Durunda who became first twice. She demonstrated a brilliant program in the all-around at first and she tamed a ribbon in the champion manner on the second day of the tournament. But the Azerbaijani gymnast’s medal ambitions had not been over yet. In the finals, she won the silver medal with clubs while she got the bronze with a hoop and a ball.

Her team-mate Lala Yusifova performed in a more humble way, mounting the top of the podium in an exercise with a ball only once.

The junior group team, preparing for the European Championships in Vienna as well, is improving its skills with each tournament. If a week ago, in Lisbon, they took the third place, now, Nilufar Niftaliyeva, Gulsum Shafizada, Sabina Hummatova, Emilya Bagiyeva and Aynur Mustafayeva became the first.

According to the head coach of the National Team, Mariana Vasileva, besides of medal winners, the girls became different nominations’ winners. Thus, Yusifova got two prizes at once - she became “Miss Sympathy” of the painters of Riga and the toy shop, the tournament’s sponsor, and, Durunda’s performances inspired the painters to such an extent that she got the prize from the same artists, staying in their memory.

Lala and Marina will set out for Bucharest this week where they will take part in another World Cup Series and Veronika Omarova will compete in the international tournament.