Junior group - the bronze medalist of the international tournament in Italy 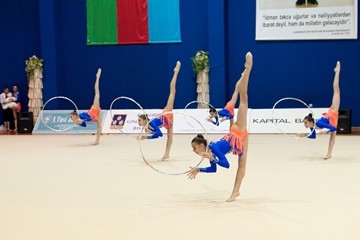 According to the press service of Azerbaijan Gymnastics Federation, Gulsum Shafizada, Sabina Hummatova, Aynur Mustafayeva, Emilya Bagiyeva and Nilufar Niftaliyeva achieved this result in the final of an exercise with 5 hoops. Our girls left behind the steadily strong team from Belarus, losing only 0.016 points to the Russian team which took the second place. As to the winner, the Bulgarian team took the first place here.

Marina Durunda was also marked with four finals of the World Cup. In the last one, with a ribbon, the 16-year-old gymnast from Baku performed more confident and became the 5th after Belarusian, Korean and two Ukrainian gymnasts. In an exercise with clubs and in the all-around, she became the 7th. And she was twice the last one in the list of eight finalists with a hoop and a ball as well.

Our second gymnast Lala Yusifova took the 12th place in the all-around.

"And, finally, the senior group team of Azerbaijan, consisting of Sabina Abbasova, Irada Ahadzade, Mansura Bagiyeva, Sabina Garatova, Siyana Vasileva and Aliya Pashayeva, became the 6th according to the results of two performances," - says the head coach of the National Team, Mariana Vasileva." They qualified for the final with 3 balls and 2 ribbons with the 3rd result but they took the 6th place in the final. In any case, I am very glad that our both individual and group gymnasts are among the finalists and winners in every tournament. We maintain the level and I hope that it will remain the same for the last two competitions prior to the European Championships in Vienna, one of which is the World Cup in Sofia this week-end".