AN AZERBAIJANI GYMNAST BECOMES THE SECOND AT THE "SCHERBO CUP" 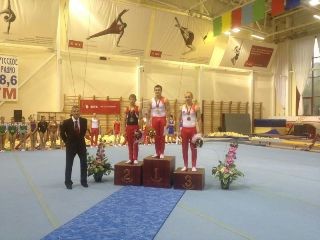 According to the press service of Azerbaijan Gymnastics Federation, the 16-year-old athlete won the silver medal performing in the final on a horizontal bar (12.8 points). A talented Belarusian gymnast Dmitry Barkalov, the participant of the Olympic Games, who like other senior gymnasts competed together with juniors according to the decision of organizers, became the winner in the event. So, Yashin's "silver" can be equated to the award of the highest stamping, especially, if to take into account that he was the only junior in this final.

Our another young gymnast Kamran Hajiyev (born in 1998), performed only in the all-around where he took the 12th place among 37 participants with a total result of 68.4 points.

The coaching staff considered their gymnasts’ performances as good. However, experts realize that it is not enough for full-fledged participation at the European Championships-2014 and the right to compete for qualification for the 2nd Youth Olympic Games in China. In this connection, participation in training camps as well as in regional and international tournaments will be continued.

As to the senior gymnasts, they continue a process of preparation for the World Championships to be held in late September - early October in Belgium.