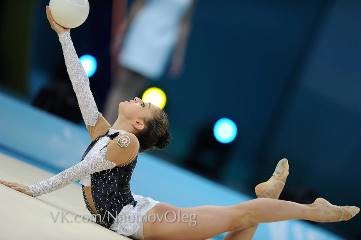 The Azerbaijani National Team’s sportswomen – Marina Durunda and Lala Yusifova have made their way through a list of the best 24 gymnasts according to the qualification’s results. Yusifova appeared on the floor first of our gymnasts. At first, she executed a composition with a ball having received 16.583 points from the judges. Then, she performed with clubs and her point with this apparatus is 16.408. Afterwards, Lala tamed a ribbon (16.366). She also performed with a hoop having received 16.45 points. According to the results of all four exercises, Yusifova earned 65.532 points having shared the 13th place with a German gymnast.

We would like to remind you that Durunda took the 5th place with a ribbon in the final the day before.

A Russian Yana Kudryatseva became the World’s All-around Champion, the second – is the floor’s hostess, Ganna Rizatdinova. And the “bronze” was won by Melitina Stanyuta from Belarus.