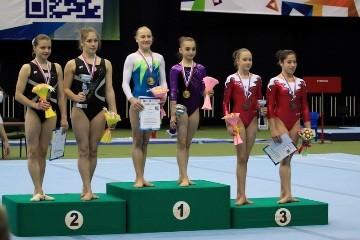 The women's artistic gymnastics competitions (all-around) have come to an end at "Mikhail Voronin" Cup being held at "Olympic" these days. An Azerbaijani national team for which Anna Pavlova and Marina Nekrasova perform, takes home 3 prize medals.

Thus, according to the results in an individual all-around, Pavlova won the second place having taken the "silver" (53,6 points) and Nekrasova - the third one and the "bronze".

It should be mentioned that our new gymnasts made their debuts performing for Azerbaijan and newcomers of the national team showed good result.

19 countries are competing in the tournament and the majority of them - are CIS countries.

A sportswoman from Ukraine Olena Vasylieva (53,9 points) turned out to be at the first place in an individual all-around.

The Azerbaijani national team won the silver medal in a team competition losing the first place only to the Russian national team. The bronze one was taken by the national team of "Dynamo". The medalists were awarded by the Olympic Games' Champion Aliya Mustafina.

The event will continue tomorrow with the competitions among men and women with separate apparatus of the all-around.

We would like to mention that the first place in a team competition among men was taken by "Dynamo" from Moscow this afternoon whose representatives Dmitriy Gogotov and Yuriy Nagorniy received 171,464 points in total. Gogotov became the champion in an individual all-around as well. The national teams from Azerbaijan, Egypt and Cyprus are taking part in this event for the first time.

In the final of "Mikhail Voronin" Cup held at "Olympic", Marina Nekrasova became the second in the event on beam and Anna Pavlova - was the third one.

Azerbaijani gymnast Anna Pavlova won a victory on parallel bars in the final of "Mikhail Voronin" Cup held at "Olympic", thus becoming the second one in the tournament.