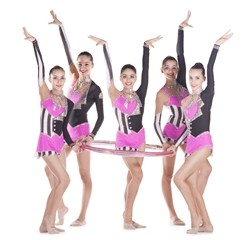 According to the press service of Azerbaijan Gymnastics Federation, majority of awards are on the credit side of a 15-year-old Baku athlete Nilufar Niftaliyeva . She gained a victory in exercises with a hoop and clubs as well as was announced as the best gymnast in the all-round. Only the combination with a ball moved her claims to win the first place aside and she won the second place with this round apparatus.

A sportswoman with Azerbaijani surname also featured in the last exercise with a ribbon. As a result, Gulsum Shafizada did not leave any chance to her rivals, having mounted the podium between two of them.

"And, finally, three medals were taken away from Varna by a junior group team, the head coach of the national team," Mariana Vasileva, informed. "The team consisting of 14-year-old gymnasts - Jannat Mammadova, sisters, Sabina and Samira Aliyeva's, Emilya Bagiyeva and Sabina Hummatova, having performed with 5 pairs of clubs none the worse than the Russian group, which became the winner, won the second place."

"A performance with 5 hoops and in the all-round in whole led the girls to the third positions. We would like to mention that the team is preparing for the qualification for the 2nd Youth Olympic Games in China, to be held in Moscow late February."

"We had took chances on the eve of the New Year to demonstrate our new programs and I heard different opinions of both experts and fans about them. We are happy to hear favorable reviews but certainly there are some points to be improved."

"A very serious preparation prior to the start of the next season, the culmination of which to become the European Championships in Baku in June, is waiting for us within the next two months," the head coach summed up.