JOINT TOURNAMENT IN SHAGHAN TURNS INTO A REAL GYMNASTICS FESTIVAL ! 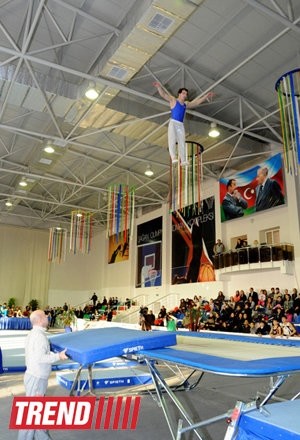 The joint event in artistic gymnastics, acrobatics and tumbling which has come to an end at the Olympic Sports Complex of Shaghan settlement situated on the coast of the Caspian Sea, was best of all remembered with … exhibition performances on trampoline.

No one depreciates Shakir Shikhaliyev's merits by any means, who became the all-around champion of Azerbaijan in artistic gymnastics again, or, merits of a gymnast in tumbling Said Salimov, who looked better in comparison with other jumpers, or, acrobats-winners among women's and men's pairs consisting of Aynur Huseynova-Narmin Ramazanova and Elchin Alibayov-Emin Gulmammadli.

Simply, trampoline - is a new sports discipline, begun to be developed by the National Federation relatively recently, gathered more young spectators. They could both watch the national team's flying gymnast Ruslan Aghamirov who soared up upwards the arena's dome and turn a somersault on a jumping bed themselves.

The people who wished to try was more than enough there!.. Both young and old alike, everybody mounted the jumping bed. Even one of the coaches in acrobatics, demonstrating how easily she could fly about in the air, impressed the audience as well as many specialists.

In short, gymnastics festival before New Year holidays was a success and everybody left a comfortable and delicately decorated sports complex's hall in high spirits .

It should be mentioned that Gymnastics Federation has held such joint competitions directed on popularization of these sports discipline several times. Besides, the event in several gymnastic disciplines at the same time is more attractive for the spectators, who can with their own eyes watch the progress of the contest in artistic gymnastics, acrobatics and tumbling alternately.

Moreover, the Federation carried the tournament's online broadcast on its website for sports fans who due to some reasons were unable to visit the Olympic Sports Complex in Shaghan, as well as for compatriots and fans living abroad.