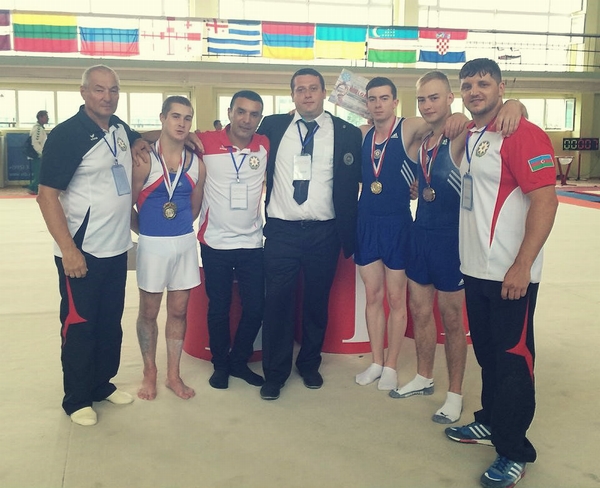 Azerbaijan’s team in Artistic Gymnastics continues to prepare for the October World Cup in China, the main event of this year.

Azerbaijan Gymnastics Federation’s press service said along with the training camp which is being held at National Gymnastics Arena's training base, mentors have also outlined a series of competitions to participate. An international tournament held in the Black Sea resort of Batumi and attended by athletes from different countries of the CIS became one of these competitions.

Thus, the leader of the national team Oleg Stepko won five medals in Georgia, including "gold" on the bars, "silver" in the all-around, on the pommel horse and still rings and "bronze" in the floor exercises. Being a team’s novice, Petr Pakhnyuk ranked first on the horizontal bar, second on the parallel bars and third in the all-around events. Representative of the Baku Gymnastics School Ruslan Namazov who has recently recovered from injuries won the team competition together with the teammates.

"Competition in Batumi became a good test of the strength and weaknesses," this is the opinion of the national team’s head coach Yevgeny Moskvin.

After Batumi gymnasts will return to the Caspian Sea’s shores, they again will start training camp and then will participate in Azerbaijan’s Championship in early August. In the first month of autumn, national team’s members will leave for the Turkish coast where they will take part in the annual “Bosphorus Cup”, traditionally held in Istanbul.