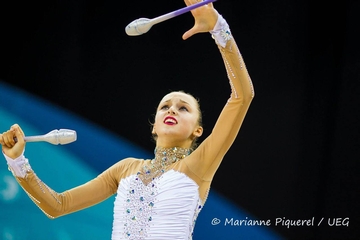 The 10th Baltic Cup in rhythmic gymnastics finished in the Polish town of Rumia on August 24.

Azerbaijan Gymnastics Federation’s press service said the leader of the national team Marina Durunda showed excellent results in the all-around, gaining 72,400 points from the judges. Thus, our gymnast won a gold medal, leaving behind two Israeli athletes - Neta Rivkin, who scored 71,800 points and Victoria Filanovsky (69,550 points). Durunda also won the "gold" while with clubs and two "silver" for a ball and a hoop.

Individuals Nilufar Niftaliyeva and Aisha Bayramova also represented our country at the tournament.

Head coach of Azerbaijani national team Mariana Vasileva commented on the success of her students.

"Marina’s performance pleases me a lot; she becomes stable from event to event. I want to note Aisha Bayramova who was able to get into the finals with the ball, as this tournament has become the first major event for her," Vasileva said.

This tournament was the penultimate event prior to the World Cup, to be held in Izmir. Aisha and Nilufar will represent Azerbaijan at the World Cup in rhythmic gymnastics, which will be held in Kazan on September 5-6.