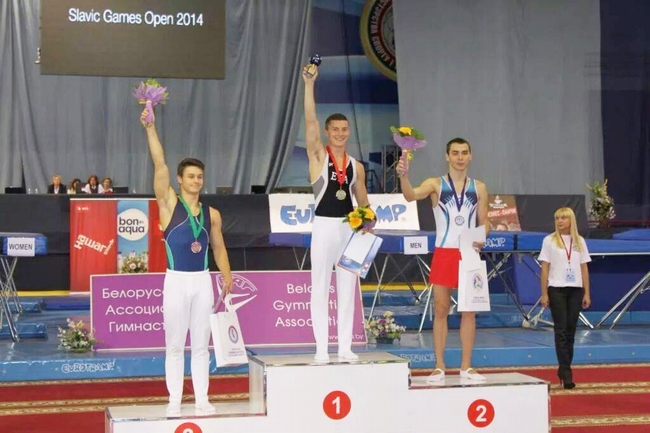 The third stage of World Cup on trampoline and tumbling wrapped up in Minsk. Four gymnast - Oleg Piunov, Ilya Grishunin, Ruslan Aghamirov and Sabina Zaitseva, represented Azerbaijan at the competition.

The encouraging fact was that once again, like last week, our gymnasts on trampoline made their way to the finals. Thus, in the synchronized events our pair Piunov - Grishunin took seventh position. First reaching the finals in the individual competition, our gymnast Ilya Grishunin became seventh, while Ruslan Aghamirov took the 26th position.

Following the results of the competition, Oleg Piunov, became the 51st in the individual standings, but then he made a pleasant surprise by winning the silver medal of the Slavic Game Open, which were held in conjunction with the World Cup. Receiving 54.950 points from the judges, he left behind gymnasts from the United States, Belarus, Russia and Mexico.

Sabina Zaitseva, who represented our country in the individual women standings, became the 22nd.

This Cup became the last event before the World Championships, which will take place in the U.S. city of Daytona Beach on November 7-9. The same four gymnasts will participate in Daytona events.