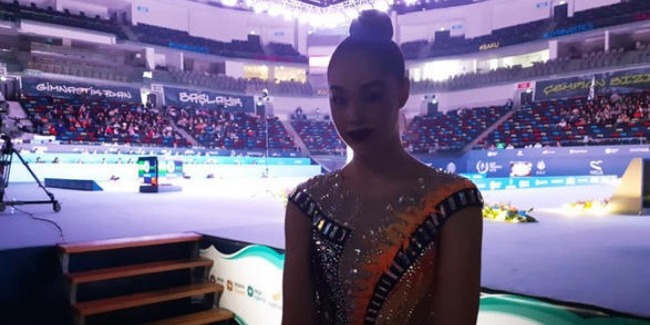 Italian gymnast Alexandra Agiurgiuculese, participating in the FIG Rhythmic Gymnastics World Cup in Baku, said that she is happy with her performance during the qualifications event in exercises with a hoop and ball.

“I made minor mistakes during my performance, but in general I liked how I completed the program,” she told Trend April 26. “This is my second visit to Azerbaijan, I participated here in the World Cup last year.”

The Italian gymnast added that the National Gymnastics Arena in Baku makes her feel excited.

“The gymnastics arena in Baku is very big, it reminds me of a theater, and I love theater, so I really like to perform here,” she said.

The FIG Rhythmic Gymnastics World Cup kicked off at the National Gymnastics Arena in Baku on April 26.

On the first day of the competitions, qualifications will be held in an individual program with a hoop and a ball, as well as qualifications of teams in group exercises with five balls.

The FIG Rhythmic Gymnastics World Cup will last until April 28, 2019.

More than 200 gymnasts from 39 countries are competing at the World Cup. During the event, 25 teams will compete in group exercises and more than 70 gymnasts will perform in individual programs.